Barrie, ON (Nov 25, 2019) – Ontario based company Treetop Trekking wins Best New Kids Attraction award from the International Association of Amusement Parks and Attractions (IAAPA). The honour was announced on Wednesday Nov. 20 in Orlando Florida, and was awarded for Treetop Trekking’s, Treewalk Village kids adventure park concept. The annual Brass Ring Awards recognize excellence from around the world in the attractions and amusement park industry and are considered one of the global attraction industry’s most prestigious honours.

Treetop Trekking introduced the Treewalk Village concept at its Stouffville, ON location in 2015, the first of its kind in the world. Treewalk Village parks are a nature-based activity designed specifically for kids, allowing them to explore the forest in a fun and interactive way. The centrepiece of each Treewalk Village park is a network of custom treehouses connected by suspension bridges, ramps, and slides. Other features to explore can include giant elevated nets (think massive trampolines suspended in the trees), underground tunnel labyrinths’, mini-ziplines, and other forest games. Since opening the first Treewalk Village at Bruce’s Mill Conservation Area in Stouffville five years ago, the company has opened a second location in Hamilton, ON at Binbrook Conservation Area (2019) and has plans to open a third Ontario location next year. Treetop Trekking also operates Treewalk Villages at two of its Quebec adventure park locations.

Other winners at this year’s IAAPA Brass Ring Awards included Disney Parks, the San Diego Zoo, and Europa Parks. These are truly international awards with other winners being from as far away as Australia, the United Arab Emirates, Norway, Sweden, and China. Treetop Trekking was one of two Canadian winners this year, with the other being Vancouver’s Pacific National Exhibition, who won in the Training Innovation category.

“I am so humbled to have our company recognized on the world stage, amongst so many big players in our industry” says company President and co-founder Stéphane Vachon. He goes on to say, “In a world where kids spend so much time with their screens and on other electronics, we are really proud to create and be recognized for our authentic experiences that bring people outside into nature.”

Treetop Trekking opened its first adventure park in Barrie, ON in 2006, and has steadily grown to become the province’s biggest and most popular adventure park company, now with five other locations: at the Ganaraska Forest near Oshawa (2012), Huntsville (2012), Brampton (2013), Stouffville (2014), and Hamilton (2019). The company also operates six parks in Quebec under the name Arbraska. In addition to the Treewalk Village activity, Treetop Trekking parks also offer Zipline & Aerial Game Treks, Team Building programs, event ziplines, and other nature based activities. 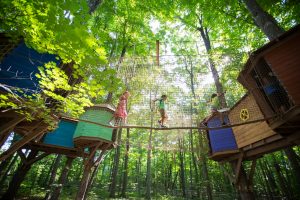 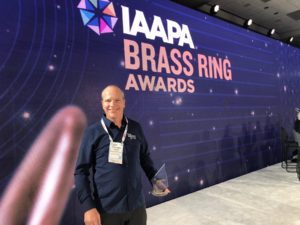 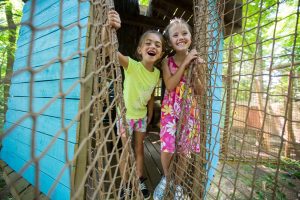